Topiary is the creative way of hedge trimming to produce pieces of art by clipping and cutting trees, shrubs and plants into specific well-defined shapes. It dates back to Roman times and the famous gardens but as with most other pieces of art, it is hard to designate a specific date when this practice began, however most experts believe that it has been greatly influenced by Persia and artful Persian pleasure grounds. It also has roots in Far Eastern cultures of China and Japan.

Although topiary could be literally practiced on any plant, in order to produce a long-lasting piece of art and for the ease of practice, plants used in topiary should have specific features most notably been evergreen. To give more material to work and create minute shapes, it is better to use plants with small leaves and needles thus the species that are commonly used are arborvitae, European box, holly and bay laurel. 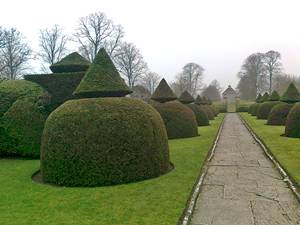 A picture I took of Topiary at National Trust property, Lytes Cary Manor in Somerset, UK

There had been a decline in the practice of topiary in the 18th centaury but mid 1800 is noted as the revival. In North America, it was Walt Disney who had a taste of creating his cartoon characters in Disneyland and brought topiaries into public attention. They also use some frames for the growth of shrubbery in the desired form and size that later will only need some trimming.

There are famous Topiary gardens and displays in the world such as Town of Topiary in Tasmania, Australia; Royal Palace located in Bang Pa-In, Thailand; Levens Hall, Stiffkey, Great Dixter Gardens and Canons Ashby all in England; The Tsubo-en Zen garden in Netherlands; Ladew Topiary Gardens, Hunnewell Arboretum and Columbus Topiary Park at Old Deaf School all in United States. You can create your own topiary if you have some intuition and the material to work with. There are some great photographs and lots of information at Early American Gardens web site. 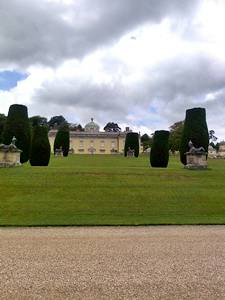 Originally, manual hedge trimmers which are the cheapest and the most environmental friendly ones have been used to create a work of art. Even today manual hedge trimmers are used for smaller topiaries and those which require minute works. They are also what are used essentially for fine-trimming but powered or motorized hedge trimmers are also available. They allow a faster and less effortful job. There had been an ongoing concern about the safety of these devices and a lot of safety measures are now included in newly produced powered hedge trimmers. Some of them only operate when both hands of the operator are pressing the handles or bottoms.

Powered hedge trimmers are either electrical or petrol powered and smaller, cordless trimmers with rechargeable batteries like the Bosch Isio Shape and Edge (use the link to visit our review) are also available. If you do not have previous experience in using a powered hedge trimmer to create an artistic object, you can start by cutting simple straight lines and sharp simple objects. At a later stage, you can try to create curvatures and bent surfaces once more by making simple objects. If you make a mess, don’t worry! You always have the option of making simpler and simpler things but be careful not to get to the main trunk! You can also find manuals and some online instructions like this essential guide to topiary for novices who are trying to create their own topiary.