The Bosch AHS 60-16 electric hedgecutter is a lightweight alternative to the Bosch AHS 7000 Pro T and Bosch AHS 6000 Pro T being almost 1kg lighter than the former while being just over half the price. This does mean that it is less powerful (450 Watt motor compared to 700 Watts). It also has a 10 cm shorter blade length and a considerably reduced tooth gap of 16 mm compared to 34 mm, so that it can only cope with much thinner branches of just over ½” as a maximum, but in practice this model would probably prefer thinner twigs as its usual diet.

However, these figures do seem to be misleading as the many user reviews seemed to be very happy with its performance, one reviewer even claiming to use it on a 12’ monster of a hedge, although it is intended to be used for only small- to medium-sized hedges! Another reviewer successfully trimmed smaller fir tree branches with, so it by no means lacks power. 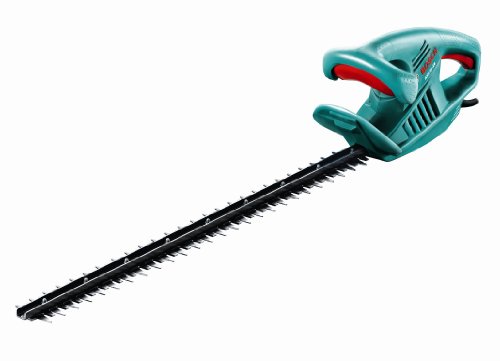 From the reviews mentioned above it seems that it copes well with all but the toughest hedges and there was only one complaint from a user who seems to have had a dud, which continually cut out – however, this is what guarantees are for and that reviewer got his money back. This general satisfaction may reflect careful selection by purchasers, with those with more challenging hedges wisely opting for the larger machines.

“The Bosch AHS 60-16 Hedgecutter is lightweight but powerful and easy to use. It deals efficiently with tough stems of mature shrubs and because it’s light can be used in awkward corners.”

There was a review with a 1-star rating based, not on the Bosch AHS 60-16 itself, but on its packaging as it had been bought as a gift. This seems to be an aspect which requires further attention. Several purchasers complained that the packaging was inadequate. Bosch or whoever is responsible for the packaging would do well to remember that perception is king and that the first impression is a lasting one. Many mentioned the initial poor impression and down-rated the machine even though its actual performance in use was reported to be excellent. However, by far the majority of reviewers would recommend the Bosch AHS 60-16 to a friend.

“We have found the hedgecutter does a brilliant job, not too heavy and not too noisy.
There are a lot on the market, I think we chose the correct one.”

The quality is what one would expect from Bosch and the machine is well balanced, ergonomically designed and comfortable to use. One female reviewer mentioned she found it a bit heavy although her husband had no trouble with it. You can expect years of use from it: a fact which is attested to by the many satisfied reviewers.

Interestingly, there is a very similar hedge cutter, the Bosch AHS 55-16 (pictured right), which has a 5 cm shorter blade but otherwise the same specifications apart from being 0.8 kg (almost 2 lbs) lighter at virtually the same price.

This reduced weight may mean this version is less robust and may not stand up to continuous use as well, but if you’re looking for a really lightweight but good quality hedge trimmer this may be an alternative.

For someone who is faced with a really challenging hedge or many hedges, one of the larger machines would probably be a better choice.

For the majority of people with hedges which do not present any undue challenges, the Bosch AHS 60-16 is a good quality, but more economical and comfortable option which will give complete satisfaction under the correct conditions.